Buckle Up, Phone Down

“The Missouri Coalition for Roadway Safety and the Missouri Department of Transportation are challenging state agencies and Missouri businesses to join the Buckle Up-Phone Down movement”.

During the year 2015, Missouri had 2,237 crashes that occurred due to cellphone usage while driving. 16% of the reported crashes stated that cell phones were being used.

Statistics currently show that 7 out of 10 people use their smartphone while driving. Texting while driving can increase your risk of an accident by 50%. Leaving you to be 23 times more likely to be in a critical incident.

So, the challenge is simple,

“When you get into any vehicle, buckle up your safety belt. If you are a driver, put the cellphone down. Turn it off if you have to. No texting and not talking unless hands free. In 2016, 940 people were killed in Missouri traffic crashes – 686 were vehicle drivers and passengers, with 63% being unbuckled. Right now, Missouri has a “no texting” law for drivers under 21 years old. But we are challenging all drivers to honor that ban no matter what their age. Reported crashes involving cell phones rose 16% in 2015. When a driver is texting and driving they are 23 times more likely to be in a critical incident. With stats like that, it’s time for business, communities, government agencies and individuals to accept the challenge”. 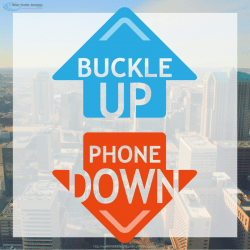 Source Links are below

Sign up with US Traffic Systems and receive special discount offers!